Liberalism and Democracy in Myanmar

Historic Myanmar elections in November 2015 paved the way for an NLD government led by Aung San Suu Kyi to take office in March 2016, and saw the country deepen its graduated transition away from authoritarian rule. Nevertheless, military forces that for decades dominated national politics remain privileged in a constitutional framework designed to deliver 'discipline-flourishing democracy'. In August 2017, the military intensified its campaign of ethnic cleansing of Myanmar's Rohingya Muslim minority, and more than 750,000 refugees fled to neighbouring Bangladesh. One critical question that now confronts the fifty million people of this Southeast Asian nation is whether their push for greater democracy is strong enough to prevail over the resistance of a powerful military machine and swelling undercurrents of intolerance. What are the prospects for liberal democracy in Myanmar?

This book addresses this question by examining historical conditions, constitutionalism, popular support for democracy, major political actors, group relations and tolerance, and transitional justice. To probe the meaning and purchase of key concepts it presents a rich array of evidence, including eighty-eight in-depth interviews and three waves of surveys and survey experiments conducted by the authors between 2014 and 2018, all of which are triangulated with constitutional and legal texts and reports issued locally and globally. The analysis culminates in the concept of limited liberalism, which reflects an at times puzzling blend of liberal and illiberal attitudes. The book concludes that a weakening of liberal commitments among politicians and citizens alike, allied with spreading limited liberal attitudes, casts doubt on the prospects for liberal democracy in Myanmar. 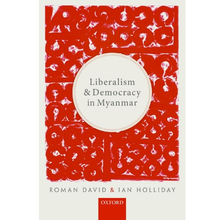 The Book and the Sword

The Book and the Sword was Louis Cha's first novel, published in 1955. The story has a panoramic sweep which has at its heart a few unbeatable themes: secret societies, kung fu masters, and the sensational rumour so dear to Chinese hearts that the great Manchu Emperor Qian Long was not in fact a Manchu but a Han Chinese, a line of descent that came about as a result of a 'baby swap' on the part of the Chens of Haining in Southern China. It mixes in the exotic flavours of central Asia, a lost city in the desert guarded by wolf packs, and the Fragrant Princess. This lady is an embellishment of an actual historical figure-although whether she actually smelled of flowers, we will never know.

A RIP-ROARING TALE OF CHINESE KUNG FU MASTERS BATTLING IT OUT FOR THE FUTURE OF THE CHINESE EMPIRE, AND FOR CONTROL OF CENTRAL ASIA. CHINA'S MOST POWERFUL SECRET SOCIETY PITS ITSELF AGAINST THE MANCHU COURT. VIRTUE AND EVIL FIGHT OVER THE DELICIOUS MUSLIM BEAUTY, THE FRAGRANT PRINCESS.
A DEAD CITY IN THE DESERT, WOLF PACKS, A BOOK, AND, OF COURSE, A SWORD...

'Helmsman Chen,' he shouted. 'Let Lord Fu go and we will allow you to leave the city peacefully.'
'What does the Emperor say?' Chen shouted back.
Qian Long's cheeks were painful and badly swollen like overripe peaches as a result of Chen's blows, but seeing his beloved son in the hands of the enemy, he could only gesture and say: 'Let them go, let them go.'
'Lord Fu will see us out of the city,' said Chen. Then, looking Qian Long straight in the eye, he announced in a loud voice: 'All the common people under Heaven would be happy to eat your flesh and make a quilt of your skin. If you live another hundred years, may they be a hundred years of days filled with fear and torment, a hundred years of sleepless nights!' He turned to the Red Flower heroes. 'Let's go,' he said.

'Utterly fascinating. For me, kung fu always used to be Bruce Lee and Enter the Dragon, which were amusing but unbelievable. Book and Sword makes it more alive, more possible and, yes, more relevant.'
GARETH POWELL, AUTHOR AND PUBUSHER

'The Lord of the Rings meets The Magnificent Seven in an Oriental setting! Graham Earnshaw's translation of this popular kung fu classic whirls you on a breathtaking carousel ride of adventure, romance and humour as swordsmen and sorcerers battle it out in China's Wild West, but this is not all blood and guts and derring do. The whole romance is underpinned by a profound philosophy. This is Crouching Tiger Hidden Dragon or Hero brought thrillingly to the page.'
ADAM WIWAMS, AUTHOR OF THE BEST-SELLING PALACE OF HEAVENLY PLEASURE 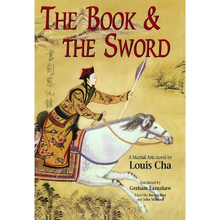 Classics of modern science writing which have crystallized big ideas, and shaped the way we think, now reissued in brand new covers.

The Deer and the Cauldron (3-vol set)

‘One of the world’s bestselling books.’ Jeremy Treglown, selecting THE DEER AND THE CAULDRON as a 1998 International Book of the Year, The Times Literary Supplement

‘I have never read a Martial Arts novel before this, but I am a convert. I might just have to add Trinket to my repertoire ...’ BETSY HORN, NEW YORK CABARET SINGERR

‘Louis Cha’s so seminal, I don’t even know who number two is.’ STEFAN HAMMOND, CO-AUTHOR OF SEX AND ZEN & A BULLET IN THE HEAD: THE ESSENTIAL GUIDE TO HONG KONG’S MIND BENDING FILMS

‘[Cha] is virtually a one-man literary movement, more a genre than an author, his thirty-six volumes of chivalry and romance mesmerizing both Chinese peasants and foreign academics alike.’ SHERYL WuDUNN, THE NEW YORK TIMES ­ 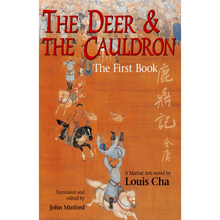 In this timely and provocative book, James Stent, a banker with decades of experience in Asian banking and fluency in Chinese language, explains how Chinese banks work, analyzes their strengths and weaknesses, and sets forth the challenges they face in a slowing economy. Without minimizing the real issues Chinese banks face, China's Banking Transformation challenges negative media accounts and reports of "China bears". Based on his 12 years of service on the boards of China Minsheng Bank, a privately owned listed bank, and China Everbright Bank, a state-controlled listed bank, the author brings the informed view of an insider to the reality of Chinese banking. 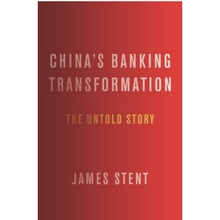 River of Life, River of Death: The Ganges and India’s Future

India is killing the Ganges, and the Ganges in turn is killing India. The waterway that has nourished more people than any on earth for three millennia is now so polluted with sewage and toxic waste that it has become a menace to human and animal health.

Victor Mallet traces the holy river from source to mouth, and from ancient times to the present day, to find that the battle to rescue what is arguably the world’s most important river is far from lost. As one Hindu sage told the author in Rishikesh on the banks of the upper Ganges (known to Hindus as the goddess Ganga) - ‘If Ganga dies, India dies. If Ganga thrives, India thrives. The lives of 500 million people is no small thing.’

Drawing on four years of first-hand reporting and detailed historical and scientific research, Mallet delves into the religious, historical, and biological mysteries of the Ganges, and explains how Hindus can simultaneously revere and abuse their national river.

Starting at the Himalayan glacier where the Ganges emerges pure and cold from an icy cave known as the Cow’s Mouth and ending in the tiger-infested mangrove swamps of the Bay of Bengal, Mallet encounters everyone from the naked holy men who worship the river, to the engineers who divert its waters for irrigation, the scientists who study its bacteria, and Narendra Modi, the Hindu nationalist prime minister, who says he wants to save India’s mother-river for posterity.

Can they succeed in saving the river from catastrophe — or is it too late? 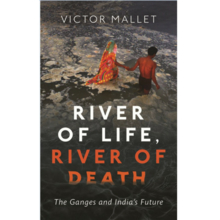 Bob Dylan is the prince of self-reinvention and deflection. Whether it's the folkies of Greenwich Village, the student movement of the 1960s and 1970s, Born Again Christians, the Chabad Lubavitch community, or English Department postmodernists, specific intellectual and sociopolitical groups have repeatedly claimed Bob Dylan as their spokesperson. But in the words of filmmaker Todd Haynes, who cast six actors to depict different facets of Dylan's life and artistic personae in his 2009 film I'm Not There: "The minute you try to grab hold of Dylan, he's no longer where he was." In this psychobiography, writer Andrew McCarron uses psychological tools and script theory to examine three major turning points, or transformations, in Bob Dylan's life: the aftermath of his 1966 motorcycle "accident, " his Born Again conversion in 1978, and his recommitment to songwriting and performing in 1987. McCarron reveals how a common script undergirds Dylan's self-explanations of these changes; and, at the heart of this script, illuminates a fascinating story of spiritual death and rebirth that has captivated us all for generations. 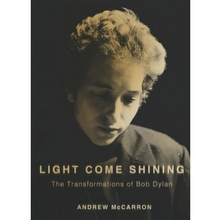 Very Short Introductions can change the way you think about the things that interest you, and are the perfect introduction to subjects you previously knew nothing about. Because of this, they have proven to be extremely popular with general readers, as well as students and their lecturers.

Very Short Introductions are the perfect way to get ahead in a new subject quickly. Our expert authors combine facts, analysis, new ideas, and enthusiasm to make often challenging topics highly readable.

The Oxford Handbook of Social Movements

The Oxford Handbook of Social Movements is an innovative volume that presents a comprehensive exploration of social movement studies, mapping the field and expanding it to examine the recent developments in cognate areas of studies, within and beyond sociology and political science.

This volume brings together the most distinguished social and political scientists working in this field, each writing thought-provoking essays in their area of expertise, and facilitates conversations between classic social movement agenda and lines of research. The Oxford Handbook of Social Movements discusses core theoretical perspectives, recent contributions from the field, and how patterns of macro social change may affect social movements, as well as suggesting what contributions social movement studies can give to other research areas in various disciplines. 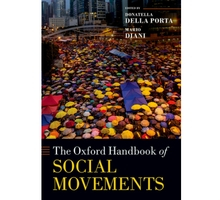 What Everyone Needs to Know

Written by leading authorities in their given fields, each volume in Oxford's acclaimed What Everyone Needs to Know series offers a balanced and authoritative primer on complex current event issues and countries. Popular topics include International Politics, Environmental Policies, World History, Sciences & Math, and Religion & Spirituality. The concise question-and-answer format is ideal for college students, professionals, and inquiring minds alike. 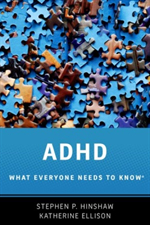 Oxford Companions combine the functionality of a subject dictionary with the breadth and scope of an encyclopedia. Their lively, accessible, and informative style makes them readable and entertaining, providing unique coverage of a wide variety of over 50 subjects, from music, art, and literature, to science, warfare, and wine. 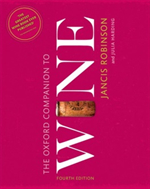 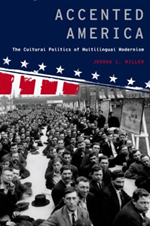 Throughout 2016, to mark the 400th anniversary of Shakespeare’s death, we bring you the very best Shakespeare resources from across Oxford University Press, for every stage from school to research.

Explore a new theme every month, with specially commissioned videos, articles, and interactive content. Go deeper with selected scholarly articles made freely available for this year. New this month: Shakespeare and music.